It has been well documented that a significant increase in the quality of frozen fish, shellfish, and meat can be achieved by blast freezing to an ultra-low temperature.

The shift to lower temperature freezing machinery is growing rapidly around the world. For instance, blast freezing yellowfin tuna and other high-value fish to an ultra-low temperature of -60ºC (-76ºF) substantially reduces transportation costs as the fish can be transported by container ship rather than air freight.

Tests have also shown that shelf-life is increased when tuna is frozen to -60ºC (-76ºF) and thawed, at a time of the customer’s choosing, in a controlled environment.

Klinge has a complete cold chain solution to ultra-low temperature storage and frozen meat transportation. Klinge’s CBU-30 system is used to blast freeze seafood and meat products, which can then be stored in the Klinge Corp’s NMF-371 containerized system at temperatures down to -60ºC (-76ºF). The Quick Thaw Units, Model QTU-42, then controls the thawing at a rate that optimizes freshness and quality of seafood and meat. Read about Klinge Corp’s ultra-low temperature equipment for the seafood and meat industry below. Fill out the form to contact a Klinge Group Specialist today! 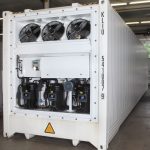 High Capacity: Achieves temperature during a 12- or 24-hour cycle.

Even Temperatures Throughout Cargo: The design of the evaporator fan and adjustable ceiling that covers the cargo provide efficient airflow control, which is essential for a quick lowering of cargo temperature.

Superior Diagnostics: Amperages and pressures within our seafood shipping containers are measured & can be viewed/transferred to GSM mobile or satellite transmission modem. 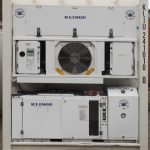 Efficient Airflow: Evaporator fan motor and fan are designed to operate in constant ultra-low temperatures down to -60°C (-76°F). Standard motors will not hold up over time.

Superior Diagnostics: Amperages and pressures are measured and can be viewed and transferred to GSM mobile or satellite transmission modem.

Reliable Deep Freezing: Provides cargo temperature in the range from 0°C to -65°C. The unit operates in ambient temperatures up to +50°C. 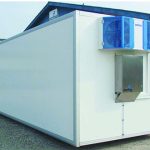 Klinge Corp’s transport refrigeration & freezing equipment has fail-safes in place to further remove risk in the transport of valuable seafood.

» Precise Temperature Recording: Datalogger links to an independently-powered audible and visual alarm system that sounds in the unlikely event that a failure occurs.

The Importance of Freezing Seafood Products

Each year, as many as 100 tons of fish are caught for commercial purposes around the world and about 25 tons are processed into various frozen fish products. Fish is extremely perishable and must be handled appropriately to prevent contamination or spoilage. Freezing fish is considered a best practice when transporting over long distances or storing for an extended period. General freezing guidelines for various types of fish include:

The Use of Refrigerated Seafood Transport Containers

Seafood reefer containers should be used when shipping fish across the ocean. In general, refrigerated seafood shipping containers are either 20’ or 40’ in length and are available in two systems:

It is also important to maintain the appropriate temperature for frozen seafood throughout the cargo handling process to maximize the storage life and maintain the quality of the product.

While meat is not as perishable as seafood, it does require freezing in certain situations, such as when it is used as buffer stock, intended for export or when it will be processed at a later date. Freezing meat can prevent the formation of microorganisms and pathogens that may cause illness. Meat is considered to be frozen when the temperature at the center of the piece reaches -12°C.

Although the normal acceptable storage range of frozen meat falls between -18°C and -25°C, this varies depending on factors such as the type of meat and thickness of the cut.

Our containers are also well suited for the transport of probiotics, which must be kept within a certain temperature range to ensure safe consumption and maximum effect. The use of temperature control containers in probiotic and enzyme transport not only allows for greater yields of quality product, they also help eliminate the need to use dry ice, which poses several health risks, to maintain proper temperatures for transport.