The increasing popularity and legalization of CBD products raise the need for equipment for hemp processing. In fact, 50% of the hemp grown across the country ends up as CBD extract. To convert the plants into a concentrate for use in pharmaceuticals and supplements, the facility must carefully control temperatures throughout both extraction and distillation. Poor temperature control will affect the quality of the finished product.

Extraction separates the cannabinoid-containing oil from the rest of the plant. This first step produces a raw oil that requires additional work to make it ready for use in supplements and other human-grade products. The oil’s remaining impurities need distillation to remove them from the CBD oil.

Producers have several options for extracting the oil from the hemp. These use non-polar substances— supercritical fluids, solvents or alcohols—to dissolve the non-polar cannabinoids from the plant. The first two methods rely on controlling the heat during the process. Excessive heat during any step of the process can result in the loss of cannabinoids through oxidation.

At room temperature, carbon dioxide takes the form of a gas, but put under heat and pressure, it reaches a supercritical state where it moves through material like a gas but dissolves non-polar oils like a liquid solvent. Producers take advantage of this dual nature to safely remove cannabinoids from hemp for processing.

Most often, supercritical fluid extraction is the method chosen by coffee producers for decaffeination. This extraction process also works for removing CBD from hemp in a safe way that does not require the use of flammable materials as processes that use solvents do.

Converting carbon dioxide into a liquid for the process requires pressurization. Liquid carbon dioxide combines with hemp in an extraction vessel. The operator pressurizes the container to a supercritical level so that the carbon dioxide has both liquid and gas properties.

Cannabinoids readily dissolve into the supercritical carbon dioxide. After extraction completes, the operator recovers the carbon dioxide for reuse. Because carbon dioxide is not flammable nor noxious, this method proves safer compared to solvent extraction. Unfortunately, those who choose this extraction method must be willing to invest in expensive equipment. Conducting this process, however, costs less than other means of CBD extraction.

Because supercritical carbon dioxide extract requires temperature regulation of the carbon dioxide, investing in containers to maintain the ideal CBD extraction temperatures will ensure the success of this process.

Solvents used for extracting CBD from hemp include hexane, methylene chloride, butane and methanol. Not all states allow solvent extraction. For instance, Vermont prohibits it.

Using hydrocarbons to extract CBD from hemp uses a process that uses pressure and heat condense or evaporate the solvent. Pressurized liquid hydrocarbons help dissolve the needed CBD compounds from the plant. Converting the solvent back into a gas allows for complete separation from the extract and reuse of the hydrocarbon.

This process starts with the liquid solvent mixing with the hemp in an extraction column. How long the two combine depends on the amount of CBD needed from the process. After soaking, the operator sends the pressurized liquid through a screen and into a collection tank. The screen filters out solids from the mixture, allowing the combined extract and solvent to move into the collection tank.

To attain the needed state of liquid or gas, solvents, such as butane, may require temperatures as low as -110 degrees Farhenheit to remain liquid but can rise to 120 degrees Fahrenheit when in gaseous form. Keeping the temperatures of the solvent controlled will ensure it stays in its desired state for drawing as much of the oils from the hemp as possible. Temperature control throughout this extraction process is vital for reaching the ideal state of the solvent and extracted amount of CBD.

A closed system such as this that recycles the solvent is safer than open methods that evaporate the flammable solvent into the air. Additionally, recovering the solvent reduces operating costs and enhances the safety of the finished product. Careful control of the extraction process using solvents in a closed-loop system may result in extracts with as little as 200 ppm of hydrocarbons.

The alcohol extraction method requires cold temperatures. Typically, producers use ethanol as the alcohol for this process. Both the hemp and alcohol combine for half an hour at -30 degrees Celsius, -22 degrees Fahrenheit.

The downside to alcohol extraction is the process’s tendency to also draw polar substances, such as chlorophyll and sugars, out of the hemp. However, producers can easily reuse the alcohol after separating the dissolved oils. To remove the polar substances still in the oil, producers employ winterization as part of the distillation and refining process.

Since products with like polarity dissolve each other, fats can dissolve the cannabinoids in hemp. Producers who work on a smaller scale and those producing only edibles may use food-grade lipids such as butter and cooking oil to dissolve the cannabinoids from hemp. Heating hemp with butter or oil to between 240- and 250-degrees Fahrenheit extracts the CBD into the fat. Producers then add the resulting butter or oil into edible products. The resulting product requires testing for potency. 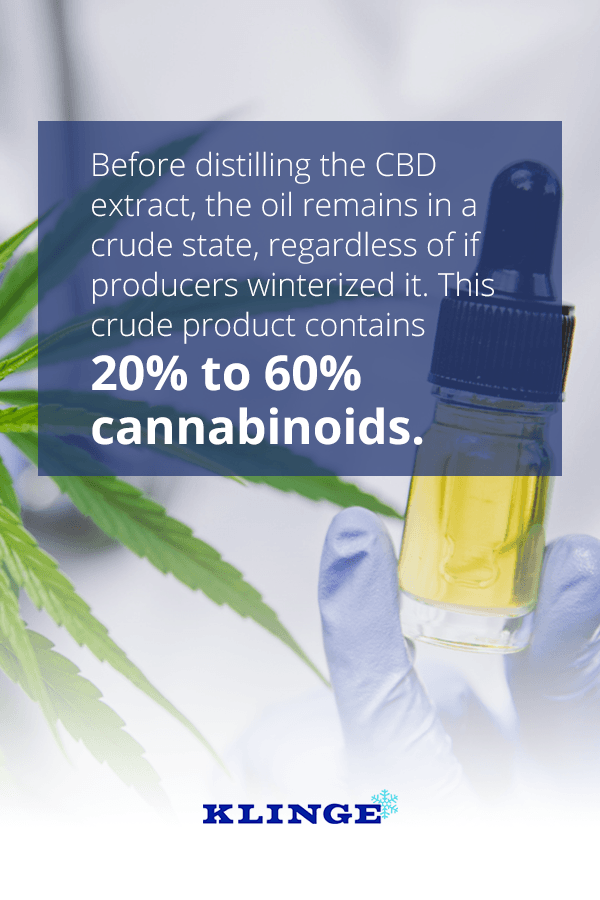 Producers must carefully maintain ideal CBD distillation temperatures to prevent degrading the CBD in the extract. Distilling refines the oil to its purest form by removing waxes, remaining solvents, fats and polar molecules. The form of refining depends on the extraction method done. Before distilling the extract, the oil remains in a crude state, regardless of if producers winterized it. This crude product contains 20% to 60% cannabinoids.

After using alcohol extraction, winterization removes some polar substances that passed through into the extract. As the name suggests, this process requires freezing the extract. Depending on the amount of extract that requires winterization, the equipment may take up a considerable amount of space while still requiring strict temperature control to drop the mixture to the subfreezing point necessary.

After extracting the CBD from the hemp using ethanol extraction, the producer adds more ethanol to the extract and freezes the result. Filtering the mixture while still cold allows fats, polar molecules and other impurities to separate from the rest of the mix. This step does not distill nor completely purify the extract. After winterization, the extract is still in a crude form and requires further purification.

During vacuum distillation, the extract undergoes a high heat process under a vacuum. Temperatures range from 180 to 220 degrees Celsius, 356 to 428 degrees Fahrenheit. The finished product contains 60% to 90% cannabinoids. The heat allows for producers to separate individual compounds from the extract for higher purity.

To further concentrate the distilled CBD into an isolate containing 99.9% cannabinoids, processors use crystallization. The process uses a solvent to dissolve the refined product. Cold temperatures allow the CBD to crystallize into a purified form. The cold temperatures required to separate the CBD after distilling is another form of winterization used for purifying.

The resulting CBD comes in a powder form, but the producer may opt to convert it into a crystal form. Both types are pure, edible CBD without any of the psychoactive effects of THC. In powdered or crystallized form, producers can measure the exact amount of active CBD in the product, allowing for more uniformity in what they sell.

As important as temperature control is for extraction and distillation, other steps in hemp processing also require strict monitoring and maintaining of specific heat levels. Post-harvest handling, chemical preparation and storage are some of the temperature-sensitive steps encountered in turning hemp into purified CBD oil.

While some growers dry their plants, the chance for mold growth in the presence of heat or moisture may be too great. Storing hemp at low temperatures reduces the loss of CBD from the plant, which breaks down from heat and oxidation.

To ensure even longer-term storage and quality, flash freezing the hemp soon after harvest preserves the terpenes, which are the essential oils in the play, better than drying, which can cause a loss of 40% of terpenes. Flash freezing using liquid nitrogen on a conveyor belt freezes the plants faster than using a standard freezer case that requires extended time for the plants to solidify.

After freezing, the hemp may immediately undergo hydrocarbon or alcohol extraction or remain fresh for drying and carbon dioxide extraction later. Later drying, however, may cause a loss of some terpenes.

For drying, ideal conditions include humidity of 60% and temperatures between 60- and 70-degrees Fahrenheit. Temperatures that are hotter than this may cause the plants to oxidize, reducing the available CBD. Additionally, excessive moisture can promote mold growth, ruining a crop.

2. Hemp Storage and Transport in Dried or Frozen States

For frozen hemp, transporting and storing the products require containers that can maintain subzero temperatures. Allowing the product to thaw and refreeze will degrade the quality. Transportation containers must be portable and have self-contained cooling units to keep the internal temperature well below freezing.

Dried hemp should remain in dry, cold conditions during transport and storage. Heat and moisture can affect the quality of the plant matter by causing CBD oxidation or mold. Maintaining careful control of temperatures during transit and until use will prevent quality problems after harvest in dried hemp.

With winterization after extraction, the biomass and alcohol slurry must chill to at least -40 degrees Celsius, -40 degrees Fahrenheit, to allow complete separation of undesirable compounds. To achieve the desired temperatures in a large enough space, producers often find small lab freezers nor grocery store freezers will suffice. Grocery store freezers have the needed size but only reach -18 degrees Celsius, -0.4 degrees Fahrenheit. Lab freezers get cold enough but may be too small.

A portable blast freezer may be a solution for these problems, depending on attaining permission for using a freezer not designed for flammable materials. This type of freezer can help overcome some of the challenges of chilling large quantities of ethanol from room temperature down to the required subfreezing temperatures for winterization or for ethanol extraction.

While many producers have a means of chilling ethanol, they may not have a way to store it at such low temperatures until needed. Redundant freezers prevent the ethanol inside from warming if one freezer unit fails. Having such a system prevents lost time from needing to refreeze warmed ethanol.

To preserve the needed temperature, producers can use a dual redundant deep freezer for a perfect solution, as long as the facility has permission to store ethanol in a container without explosion proofing. This freezer can reach temperatures as low as -65 degrees Celsius, -85 degrees Fahrenheit, and uses a pair of freezers that back each other up in case of failure of one.

To convert the form of CBD in hemp into a more easily absorbed format for human ingestion, producers turn to decarboxylation. Using heat, this process converts acidic cannabinoids, such as CBDa, into neutral forms the body can use, such as CBD.

While the process naturally occurs over time, decarboxylation happens faster with heat, ensuring a set quantity of CBD in the product.

To prevent degradation of the extract and retain the purity of the finished CBD, maintain appropriate temperatures throughout hemp processing. Whether freezing hemp immediately after harvest or seeking ways to keep ethanol cold for extraction, producers must use freezer containers with precision temperature controls.

For the right freezer or refrigeration unit for reaching and maintaining the required temperatures, browse our pharmaceutical containers. For more information on finding a unit to meet hemp processing specifications or a quote, contact us.